Can my HOA, city or county prevent me from going solar?

In short, no. HOA's, cities and counties in the state of North Carolina do not have the authority to prevent a homeowner in a detached single-family residence from installing solar panels on their roof. HOA's, cities and counties do have the authority to screen the solar panel installation location. The allowed screening of the installation location cannot prevent reasonable use of the solar equipment.

How big of a solar energy system do I need?

The size of your solar energy system depends on several factors including how much electricit you use, and how much space is avilable (roof or ground). The solar energy system can be built to supplement all or just a portion of your energy usage (depending on your goals). SolFarm's team can quickly work through these factors with you to determine what system would best suit your individual needs.

How much does a solar energy system cost, and how much will I save on utility bills?

The price of solar energy is quickly reducing; however, there is no single or simple answer to this. Solar rebates, tax credits, and other financial incentives can greatly reduce the cost of a PV system. This cost depends on a number of factors, such as whether it is a stand-alone system or is integrated into the building design, the size of the system, and the particular system manufacturer. For solar water heaters and space heaters, you also have to consider the price of the fuel used to back up the system. In most cases, you would have to add the cost of natural gas or electricity to get a more accurate estimate of how much you can expect to pay for a solar energy system.

How do I know if I have enough sunlight for PV?

A photovoltaic (PV) system needs unobstructed access to the sun's rays for most or all of the day. Shading on the system can significantly reduce energy output. Climate is not really a concern, because PV systems are relatively unaffected by severe weather.

Will my roof leak after the solar panels are installed?
Roof leaks are not common after a SolFarm installation. Our proven track record comes from using great materials and years of professional experience.
Do you warranty the roof after the solar panels are installed?
Yes, SolFarm Solar Co. provides a 5 year warranty post installation against roof leaks caused by our installation.
Do I need to contact my homeowners insurance about the solar energy system?
Yes, each insurer has their own methods of insuring and keeping records. In most cases premiums do not increase for a solar energy system installation.
What is photovoltaics (solar electricity) or "PV"? 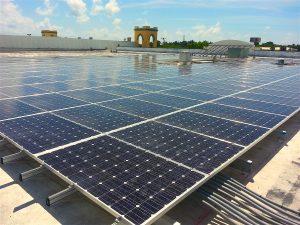 The word itself helps explain how photovoltaic (PV) or solar electric technologies work. First used around 1890, the word has two parts: photo, a stem derived from the Greek, phos, which means light. Then volt, a measurement unit named for Alessandro Volta (1745-1827), a pioneer in the study of electricity. So, photovoltaics could literally be translated as light-electricity and that's just what photovoltaic materials and devices do. They convert light energy to electricity, as Edmond Becquerel and others discovered in the 18th Century.
What are the components of a photovoltaic (PV) system?

A PV system is made up of different components. These include PV modules (groups of PV cells), which are commonly called PV panels; one or more batteries; a charge regulator or controller for a stand-alone system; an inverter for a utility-grid-connected system and when alternating current (ac) rather than direct current (dc) is required; wiring; and mounting hardware or a framework.

A PV system that is designed, installed, and maintained well will operate for decades. The basic PV module (interconnected, enclosed panel of PV cells) has no moving parts and can last more than 30 years. The best way to ensure and extend the life and effectiveness of your PV system is by having it installed and maintained properly. Experience has shown that most problems occur because of poor or sloppy system installation.

What's the difference between PV and other solar energy technologies?

There are four main types of solar energy technologies:

Can I use a photovoltaic (PV) system to power my home? 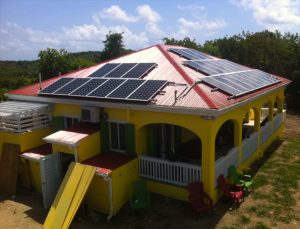 PV can be used to power a structure’s entire electrical system, including lights, cooling systems, and appliances in the home. PV systems today can be blended easily into both traditional and nontraditional structures. In the Caribbean modules can be mounted on a south, west, or east-facing roofs.

Can I use photovoltaics (PV) to power my business? 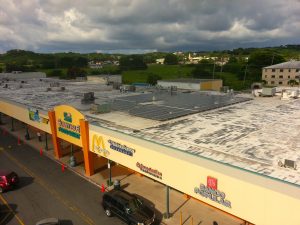 PV systems can be blended into virtually every conceivable structure for commercial buildings. A PV system with storage and back up generation is know as a microgrid. Microgrids for commercial structures can be connected to the utility or function independently of the utility.

Commercial facilities in the Carolinas can produce 100% of their required energy at a cost well below utility supplied power and stabilize their energy cost for decades. An independent renewable energy system or microgrid can employ and combine a variety of technologies to deliver 24/7/365 reliable electrical power; PV, wind (if available), electric storage, combined heat and power (CHP) for cooling and hot water, and fossil fuel backup generation (piston diesel or micro turbines). These systems help businesses meet solfarm-solar-delivered-virgin-island-commercialand exceed their long-term sustainability goals.

Why should I purchase a PV system?

People decide to buy solar energy systems for a variety of reasons. For example, some individuals buy solar products to preserve the Earth's finite fossil-fuel resources and to reduce air pollution. Others would rather spend their money on an energy-producing improvement to their property than send their money to a utility. Some people like the security of reducing the amount of electricity they buy from their utility, because it makes them less vulnerable to future increases in the price of electricity.

If it's designed correctly, a solar system can provide power during a utility power outage, thereby adding power reliability to your business or home. Finally, sometimes a location is outside the service area of the local utility and a solar system with storage is the only way reliable 24/7 power can be obtained.

How is a solar electric system designed, installed, and maintained?

SolFarm works with its clients to establish the design criteria for each system. Our NABCEP certified team has years of experience designing and installing solar electric systems. PV systems have few moving parts, so they require little maintenance. The components are designed to meet strict dependability and durability standards so they can stand up to the elements. Our team works with you to first evaluate the energy efficiency of your business or home to identify way to reduce your electrical load. This improves the building’s energy usage and often reduces the size and capital cost of the renewable energy system required. This is especially import if your structure is not yet designed or built, it is important to make the building as energy efficient as possible to reduce your PV system's energy requirements.

How can we get electricity from the sun? 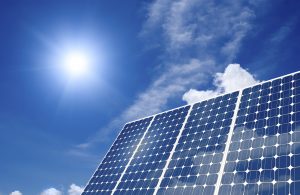 When a semiconducting material, such certain kinds of silicon, are exposed to sunlight, they release small amounts of electricity. This process is known as the photoelectric effect. The photoelectric effect refers to the emission, or ejection, of electrons from the surface of a metal in response to light. It is the basic physical process in which a solar electric or photovoltaic (PV) cell converts sunlight to electricity.

Sunlight is made up of photons, or particles of solar energy. Photons contain various amounts of energy, corresponding to the different wavelengths of the solar spectrum. When photons strike a PV cell, they may be reflected or absorbed, or they may pass right through. Only the absorbed photons generate electricity. When this happens, the energy of the photon is transferred to an electron in an atom of the PV cell (which is actually a semiconductor).

With its newfound energy, the electron escapes from its normal position in an atom of the semiconductor material and becomes part of the current in an electrical circuit. By leaving its position, the electron causes a hole to form. Special electrical properties of the PV cell—a built-in electric field—provide the voltage needed to drive the current through an external load (such as a light bulb).